One of the stand-out commercials of Super Bowl LV was Oatly CEO Toni Petersson chanting, “Wow, wow, no cow” in a field of grain. It pretty much summed up the runaway dairy alternative brand — unconventional, non-flashy but with a widely appealing aesthetic, and grounded in authentically out-there plant-based quirkiness.

The Swedish company is expected to price its IPO deal Wednesday, May 19, and trade the next day. It is offering about 84.4 million American depository shares at $15 to $17 each — according to Barron’s, at $17 a share, Oatly’s market capitalization could hit $10 billion. Crunchbase reports that Oatly has raised $241.1 million in funding with big-name investors like Oprah Winfrey, Natalie Portman, former Starbucks Chairman and CEO Howard Schultz, Orkila Capital, Rabo Corporate Investments, and Jay-Z’s Roc Nation.

So, what’s the deal with plant-based dairy alternatives? 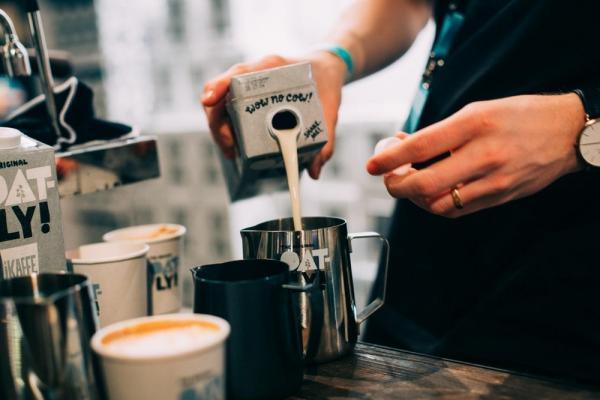 As plant-based foods and milk alternatives sales soar, a new generation is gearing up to go vegan (or plant-based). According to Statista, 7.5% of Millennials and Gen Z have given up meat. Younger generations have gone vegan at nearly double the rate of older Americans.

The health benefits of plant-based, vegan, and vegetarian eating has become a mainstream conversation and are getting more conventional healthcare buy-in. Widely viewed documentaries like Netflix’s The Game Changers (2018) helped fuel the conversation around vegan diets as something for everyone and every athlete.

As more tasty options enter the market, consumers have the benefit of a diverse and growing array of products.

An Eye on Climate Change

The WWF reports that about 270 million dairy cows worldwide are part of the dairy industry milk production. Pressure to produce more milk in turn stresses natural resources like fresh water and soil. In addition, the cows and their manure also contribute to greenhouse gases and degrade local water resources.

With the drive to net-zero carbon emissions, industries and consumers alike must explore alternatives that lessen the impact.

Oatly is the delicious, nerdy standard-bearer that the new plant-based movement needs. Quirky viral messaging makes it accessible and forward-/futuristic-thinking expands the conversation to new audiences. It’s the kind of “wow, wow, no cow” social change momentum that will see returns in its IPO and in the way that it impacts the net-zero conservation movement.

This Minecraft map hasn't just been fun to play in the sandbox game, but it's also helped raise a massive amount of money for charity efforts.

The S Curve of Learning https://bit.ly/3FmpJxS

'Feel the feelings': Millennial co-founder of a $2 billion company on dealing with rejection at work https://cnb.cx/3T5jjaD

Why this Seattle venture capitalist moved to a farm — and the startup lessons learned along the way https://bit.ly/3z7GAk1

How copying plants could produce the fuel of the future https://bit.ly/3Tod1CD

Toward equitable, quality education for all: The importance of recognizing learning and skills https://brook.gs/3yMaSsm

From the surprising to the slightly more dubious, here's a look at some of the food innovations from the 126 countries represented at the SIAL food fair in Paris
https://bit.ly/3gAn1dI

Tech Companies Innovate at the Edge. Legacy Companies Can Too.
https://bit.ly/3snD2qg

What it will take to clean up our food supply https://bit.ly/3T89Cbs

Robo-Teacher? Maybe not - at least not quite yet - but there may be a growing role for AI in the classroom. https://bit.ly/3gfpxWZ

Digital transformation is no longer a technology consideration. It is a business priority. https://bit.ly/3z8tfIq

How To Map The Customer Journey In Edtech https://bit.ly/3eH4rA5